Warning: Use of undefined constant picon_action - assumed 'picon_action' (this will throw an Error in a future version of PHP) in /homepages/5/d168817096/htdocs/10kayear.com/wp-content/plugins/personal-favicon/personal-favicon.php on line 116
 10 Resolutions for 2016 - 10KaYear
You are here: Home / Cash / 10 Resolutions for 2016
0 Flares Twitter 0 Facebook 0 0 Flares ×

Everybody has New Year’s Resolutions, right? So we’ll get in on the act here – but with a twist, as we’ll give you 10 Resolutions for 2016, but we’re going to ask you to try THREE. That’s right, you don’t have to take all of the advice here, just consider adding three of these tricks to your money repertoire. Ready? Here goes!

Basic, basic money management advice. But some of you may not have a budget at all. You should know where things are going, and what you’re bringing in, and have a general idea of income and outflow.

Don’t have one? Try one of these tools:

YouNeedABudget.com. YNAB is something we started trying out – so we can’t say “try it out it’s cool” just yet.

EveryDollar. Leave it to Dave Ramsey to come up with a pretty nifty online budgeting tool that’s free (and he suggests “Fun”). (We LOVE Dave Ramsey.)

Simple. In one of the interviews we’ve conducted for the book we’re working on (working title: Financial Survivalist), we first heard of this bank-meets-online-budgeting-tool.

2. Put credit cards in their place.

Advice on credit cards seems to be everywhere. One person will launch a blog telling you how to maximize your frequent flier miles using cards, another will tell you to cut them all up.

I can’t stress this enough: you should know what works for you. If you ARE the kind of person who pays off your balance each month, then maybe getting points or cash back or something like that is okay. If not, then maybe you should cut them up.

3. Have an emergency fund, no matter how small.

If you focus on the budget enough to know where it’s coming and where it’s going, you’re on your way to knowing how much of an emergency fund makes sense.

Advice from the gurus is all over the map on this one – one month, three months, six months – but our theory here is that $500 is better than zero.

One thought? Come up with a goal for the end of 2016, then divide that goal by 12 (or 24 or 26 if you want to do this with every check you get). Go to your bank and set up a separate savings account just for this purpose. Then make it happen, a little bit at a time.

Got a mobile phone plan? (Who doesn’t.) Cable TV? Auto insurance? Heck, even your electric company or your gas company. One rule of thumb is to get them on the horn once every six months.

You don’t have to lie and say you’re going to cancel service – but you can say you’re shopping around and want to be sure you have the best deal possible. Often, they’ll work with you because you’re a valued customer.

5. Maximize your retirement benefits at work.

If you’re skipping this section because you’re a freelancer, that’s fine. Go to #6.

If you’re working for “the man,” though, you have access to a 401(k) plan, right? (403(b) plan if you’re employed by a not-for-profit or you’re in education.) You should be putting in as much as you can afford – I know, I know, people say that all the time.

The maximums didn’t change for 2016, and here’s a link to all the info you need.

The other important factor to consider here: the match. Your company should have a match – where they add to what you put in with dollars that you can access once you retire (provided you meet the vesting requirements). If your company matches on the first 3 percent and you’re only putting in 2 percent, you are leaving money on the table.

Of course there’s a website devoted to the Roth IRA. The big advantage to this plan is that you are putting in money AFTER TAXES.

Why is that important? You have already paid taxes on the dollars you are putting into a Roth; while a traditional IRA or 401(k) is considered “pre-tax.” When you withdraw your Roth dollars, you won’t have to pay taxes on them. IRA dollars, however, will be taxed at whatever rate you’re subject to at the time.

No one has a crystal ball, but Uncle Sam always likes to get his share. If you’re betting on whether or not future tax rates will be higher or lower than they are now, just take a look at the US Debt Clock. I know where I’m betting. 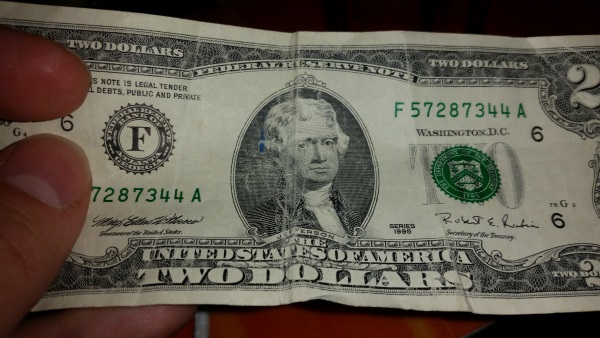 Imagine the look of horror at Starbucks when, instead of reaching for my mobile phone to pay with the VERY DANGEROUS Starbucks app, I pull out a five-dollar bill.

(I know what you’re thinking: what about Bitcoin?! I’m not even going to start with that – hey, it could be an awesome thing down the road, and it could revolutionize the world as we know it. But I’m not thinking that day is happening soon. And til it does, you need cash.)

We found a great post over at The Simple Dollar. And it got us thinking: do we feel we “deserve” too much?

It’s a trap: telling yourself you deserve this latte, or that new shirt, or whatever can spiral out of control rather quickly. (Even worse if you’re keeping up with the online Joneses, who seem to have everything right now.)

Budgeting trick: give yourself a weekly latte budget, or a monthly clothing budget. In cash. When it’s gone, it’s gone.

9. Drive it til it falls apart.

Automobiles are such a waste of money, and you shouldn’t fall in love with the idea of “new.” It’s not worth it.

(And don’t even get me started on leasing. I’ve done it, and what started as a low-mileage lease turned into a nine-year loan. A story for another day.)

With the prevalence of information on cars – we’ve used Edmunds.com forever and it’s the best – there’s no real reason to buy new.

(If you can pay cash for a used vehicle, that’s even better. But that’s another story for another day.)

10. Be okay with almost getting there.

“Perfect is good, done is better.”

Had a budget in 2015 and cheated a little? Focus on your progress made, not your mistakes.

Resolved to pay down debt but didn’t get as far as you hoped? That’s okay – you did make some progress, right?

Don’t let a little slip here or there keep you from the bigger goal. Because you can get there.

Like we said above – pick three of these for starters. See how you feel in a couple months. Maybe you’re on your way to a little more breathing room, and maybe you’ll want to make the leap to a fourth or a fifth resolution.