Warning: Use of undefined constant picon_action - assumed 'picon_action' (this will throw an Error in a future version of PHP) in /homepages/5/d168817096/htdocs/10kayear.com/wp-content/plugins/personal-favicon/personal-favicon.php on line 116
 Why You Should Track Everything - 10KaYear
You are here: Home / Personal Finance / Why You Should Track Everything
0 Flares Twitter 0 Facebook 0 0 Flares ×

Here, we’ll learn that “set it and forget it” isn’t really for financial planning. 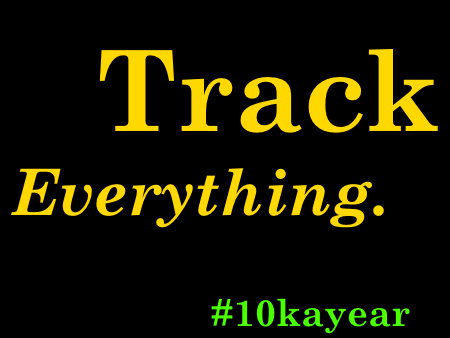 What could have been a really pleasant surprise last week – an item arriving in the mail from Fidelity, asking me to get in touch with them – really got me thinking. Just how organized AM I? And, how organized are you?

Here’s the drill. A long time ago – twenty-plus years – I worked in higher education. During the two years I was there (at Chicago State University, if you’re curious; I was Sports Information Director in the early 1990s), in addition to the retirement program I could take advantage of through the State of Illinois, I also signed up for a 403(b), which is the not-for-profit world’s version of the 401(k).

It wasn’t THAT much money that I was able to squirrel away on my salary as a twenty-something. But it was, uh, something. So I left it there.

We moved – actually, as you are wont do do in your twenties, we moved a grand total of 5 times since I left that place of employment. It should be no surprise, then, that something fell through the address change cracks. And Fidelity was that something.

This envelope in the mail suggested I call and update my address. And, in doing so, I discovered that I had an account I had forgotten about.

Why You Should Track Everything

1. Jot down everywhere you have worked

I’m Generation X, and I’m probably closer to average when it comes to number of jobs in my lifetime. (It’s somewhere around nine, if my math is correct.) Each and every one of those probably had a retirement account of some sort, right? Did you take advantage of all of those accounts?

What about pensions – those existed at one time, and I have one that I’ll be able to take advantage of when I’m old enough. (I worked with pension actuaries at one time, so you had better believe I know about that one.)

2. Look under the virtual couch cushions

I actually do have a couple “set it and forget it” accounts – places like E*Trade and Capital One (who bought the ING Direct brand a few years back). I use those for things like a rainy day fund and for auto-deposits from Amazon.

Don’t forget PayPal, either – I happen to have two accounts tied into different bank accounts; one for business and one for personal.

3. And keep track of spending, too

That’s actually a scary number – and bear in mind this little factoid for tax planning (*I’m not a professional and you should absolutely talk to your own financial advisor): the amount you spend out of pocket in excess of ten percent of adjusted gross income, not six percent, is deductible on your taxes. Grrrr!

You should know as much about what’s heading out the door as you know about what’s coming in. So keep track of what you spend.

I won’t spend it all in one place…

It was a nice little surprise to find out there’s more in my retirement fund than I originally thought – but emphasis on the word “little.”

This random envelope did remind me that I should be tracking everything…what about you?